Ukrainian schools have a tradition at the end of May called Останий Дзвоник (“ostany dzvonyk”), or “Last Bell,” which happens on the morning after the last day of classes. It’s an hour-long ceremony to honor everyone – but especially the graduating 11th-formers – and officially close school for the year.

All the pupils dress up and assemble in order around the school yard. Then out marches the Queen of Knowledge – this year one of my 11th-formers, Dana – followed by her “ladies,” six of my adorable 2nd-formers in white dresses. They lead the rest of the 11th Form, which lines up in the middle of the yard. 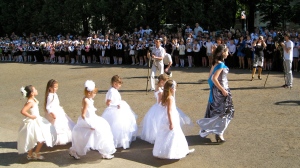 Then it’s time for Dana to pass her crown to another pupil; usually it’s a rising 11th-former, but this year’s 10th form is not strong so they were skipped and Dana passed her crown to Nazar, one of my 9th-formers, who became King of Knowledge. He was dressed to fit the part, with four little princes in tow. I felt a little like I was in a fairy tale.

Nazar approaches to be crowned King of Knowledge

Dana passing her crown to Nazar

And finally, the last bell is rung by a 1st-former carried on the shoulders of an 11th-former. This reminded me a little of the “passing the banner” part of Harley (my high school) graduation.

But wait! The last waltz must be danced. Each 11th-former chooses a teacher/administrator for a short dance.

Lastly, each 11th-former releases a pigeon into the sky, to send off their school days. Beautiful.

After the ceremony, pupils give flowers to their favorite teachers. Yes, I got quite a few flowers. J They also go picture-happy, which I was excited about because I don’t have many pictures with my pupils. I was able to get some good ones today:

Some of my (favorite, shh don’t tell!) 9th-formers, from L: Vitaliy, Natalia, Christina, Christina, Nazar, me, Hanna, Tanya, Vika, Serhiy, Olha, & I don’t know who the girl in front is

With the 3A class! Adorable and really strong pupils. I won’t list all their names b/c I don’t know them all