**Pictures below: click on a picture to make it larger

Last weekend was my counterpart Halya’s baby’s baptism (the baby’s name is Mark). The ceremony was in her husband Sasha’s village (Greek Catholic) church just down the road. It was the first baptism I’ve seen and was quite nice. Unfortunately I didn’t get very good pictures because of where I was standing, but these might give you an idea of what it was like. Mark has four godparents — Misha, Halya’s cousin; Anya, Sasha’s cousin; Inna, Halya’s cousin; and Ihor, Sasha’s friend — who were more part of the ceremony than Halya and Sasha, which was interesting to me. After the baptism the real party started. 8 hours (12-8pm) of eating, drinking, & dancing! So many people! Apparently baptisms are a big deal. It was the longest Ukrainian celebration yet for me — the food kept arriving, the musicians kept playing, toasts continued… It was really fun, though by the end there were some pretty drunk Ukrainians stumbling around.

My latest triumph at school has been persuading my colleague, Dina Dmytrivna, to objectively pick which two of our three strongest 10th-formers will compete in the regional English Olympiad competition. She wanted to pick her favorites, but later she decided we would test them further with listening and speaking and decide after that. Yay for objectivity! 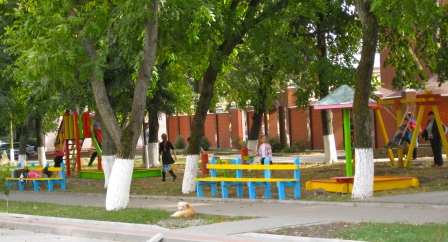 In the span of one day this little playground & benches were installed across the street from my apartment. They made that section of street a pedestrian street in August, and I’m glad there is now a safe place for kids to play. I can hear laughing, yelling, & playing from my apartment on sunny days.

The Sniatyn newspaper, Голос Покуття (“Holos Pokuttia”), did a nice write-up on my choir director after we sang at the Methodological Teachers’ Day celebration. Our director, Roman Vasyliovich, gave me a nice shout-out (bottom 3rd of the paragraph). He says: “Especially I thank Tammela Platt, a young woman from America, who works at Sniatyn’s School No. 1. She teaches our children English, and already knows Ukrainian well and sings very well!” 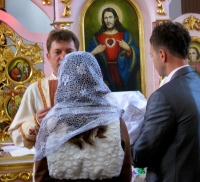 I told you there were a lot of people at the baptism party — all the chairs plus some were filled. 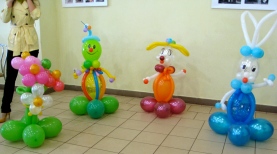 This was only the beginning of the food…yum.

Halya, her cousin Misha & his girlfriend Anya, our neighbor Max (who by this point was pretty drunk)

I bought a blender that came w/ a coffee grinder! Stay tuned for delicious blended recipes.

I also inherited a washing machine from my landlady, who bought a new one. No more handwashing! (At least until the machine’s motor dies)

Autumn leaves on the side of my school.

7 thoughts on “Recent Highlights, in Pictures”