Ah, Hampstead Heath, you are one of my absolute favorite places in London. Being on the Heath is like being in a different world; you can forget that you live in a metropolis of 8 million+ people. Sheer bliss. 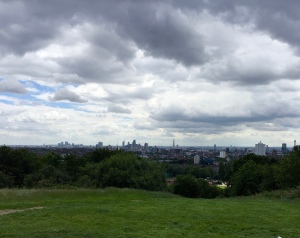 View from Parliament Hill in July 2016.

And in this case, a bit of healthy pain to go with that bliss. F and I tromped over to Parliament Hill on a gray and windy Saturday morning for the Jubilee Hall Trust “Run for your life” 10k trail race. J ran it last year and convinced me to sign up, then had to miss it due to another commitment, so F was able to run in her place. The group of 100-odd 10k runners had a low-key feel, with only a handful of us wearing club jerseys. It’s nice to run a race with a lot of “normal” runners from the community sometimes — a bit like the Crouch End 10k. 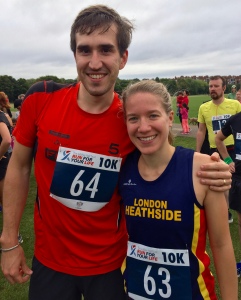 The course started at the bottom of Parliament Hill, near the athletics track. One of the race marshals led a remarkably effective 5-minute warmup just before the start; it did more to warm us up than the slow 4-minute jog F and I took. Then we were off for two 5km laps of Parliament Hill. (Side note: a few of us only had 9.3km on our Garmins after the race, so we’re not sure it was a full 10km long.) Distance discrepancies aside, it was a tough course: undulating, uneven terrain — mostly trails — up and around the Heath. Luckily the ground was dry, and the cool, breezy weather was actually welcome once we got going.

As you can see from my splits, the hills definitely affected the pace. F and I had agreed to run the first 7-8km together — it’s great to have a partner you can be active with! — and then if one of us was feeling good towards the end, (s)he could pick it up. That ended up being F, as I felt pretty knackered after about 7km; I managed to pick my pace up for the last kilometer or so, but it wasn’t quite enough to catch him!

Overall, I’m pleased with my run (50:18) and was happy to treat the race as: 1) a way to spend time with F after a busy week, 2) my “long” run for the week, 3) good general training, and 4) a preview to cross country season! Running on the Heath is one of the great joys of living in north London, and it was F’s first time doing so, which made it extra special to look around and take in the woodland beauty.