A couple months ago, F and a few of his work colleagues decided to run an autumn 10k together. F asked me if I wanted to join — of course! — and I helped him look for races in October. We settled on the Mornington Chasers Regent’s Park 10k — the first race of their “winter” series. Here’s my recap of the race. 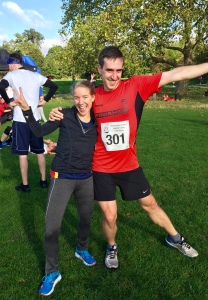 Post-race. The woman taking our photo encouraged us to strike an appropriately celebratory pose!

I’ve run a couple of 10ks over the past month and am finally starting to do some faster workouts (hello, hill repeats and Heathside roller coaster!), so my goal for this race was to run under 50:00 and ideally around 48:00. Knowing that Regent’s Park is pretty flat — though there are some sneaky inclines along the course! — made me confident that I could probably be close to my goal time. F and I cycled down to the park and met his co-workers, then took off our layers and lined up to start, still a bit chilly in the brisk 50F/10C morning air.

As we started off on the first of three equal laps, F pulled away and I let him go, noticing that my pace was already pretty quick and not wanting to push too early. Sure enough, I went through the first kilometer in 4:31, feeling pretty good but with a small side cramp. I dialed back a bit, knowing that I “only” needed to average around 4:45/km to run 48 minutes. I caught up with F just after the 2km marker, and we ran together until 6km. Running together helped both of us, especially as we realized we’d gone out a bit too fast and had to slow down for the 5th kilometer (5:10).

At 6km, I felt more sprightly than F so started pulling ahead. I managed the next two kilometers just under 5:00 each — the typical mid-race slump — before hitting the third lap and finally feeling like the end was starting to be in sight. Passing Cookie Monster for the last time (yes, there was a marshal dressed in a Cookie Monster costume), I pressed on past the fountain and around towards the zoo (hello, dromedaries!). By the final straightaway, I didn’t have much left for a kick but managed to finish in 48:03 (chip time) — right around where I’d hoped to be. I was 118th/323 and the 26th woman of 122. F came in just over a minute behind me, also under 50:00. Overall, I’m pleased with how the race went and am glad to see my fitness improving.

I like these Regent’s Park 10k races in part because the 3-lap course passing through the finish line helps you divide the race into thirds. I attempted to evenly pace the race by laps. That didn’t go quite to plan, with 15:31, 16:49, and 15:39 laps (there’s that mid-race slump again), but it’s something to aim for. Although some people think the course is too slippery and narrow at points, I quite like running in Regent’s Park and taking in the sights of ducks, dogs, and greenery while running along. Always a fun morning out.