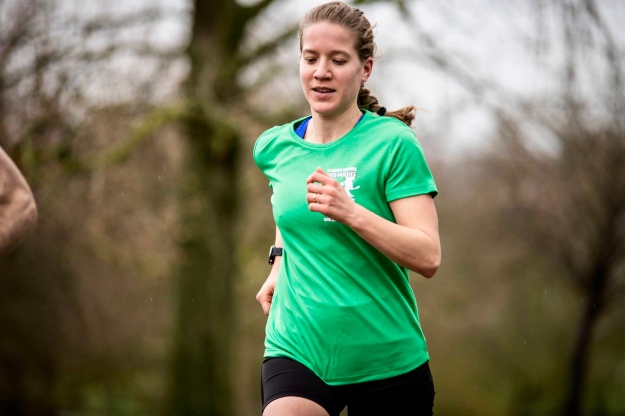 Background: My running club, London Heathside, hasn’t had its own road race for a number of years. (It used to be the Hampstead 10k, the final iteration of which I ran as my first race with the club back in 2013.) A few of the club committee have been pushing for a while to revive a Heathside-run road race in our local area. The club plays a large part in the Crouch End 10k, but that’s actually the YMCA’s race. We also have an intra-club 5km handicap race in Highgate Woods in the summer, but that’s a different sort of event. This intra-club 5-miler in Finsbury Park was a good start to hopefully bringing back an annual Heathside-run road race.

Goal: I ran an unexpectedly fast Finsbury parkrun two weeks ago so thought I could run a pretty good time in this 5-miler, although grappling with “the hill” three times would not be easy. I didn’t think I could improve on last year’s 5-mile PB but wanted to run under 37:00.

Race strategy: I was feeling pretty sluggish in the morning so, on Gabi’s advice, decided to take it steadier on the first lap (of three), then try to pick up the pace if I felt good.

Weather & outfit: A warmish 9C/49F and cloudy with a bit of drizzle. Good running weather, actually. I wore shorts, a technical t-shirt (some people wore their club vests but it was a casual event so I opted for a regular tee), and my Saucony Kinvara 8s, which I usually race in. 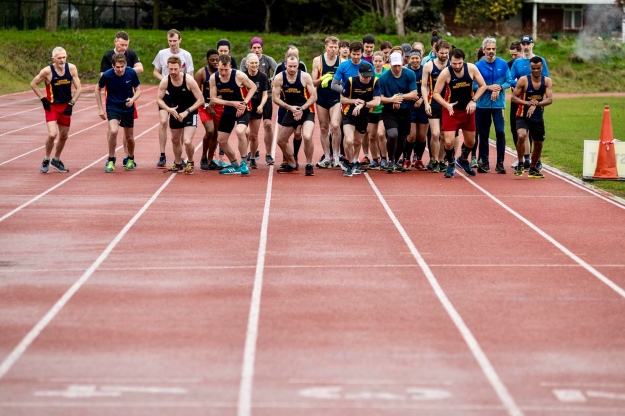 The race: The course was a variation on the Finsbury parkrun course, which I know very well, having run it over 30 times. We started with one lap of the track, which helped me clock a swift 4:21 first kilometre. I know I can run strongly down the long descent and up the long, gradual incline on the far side of the park, so I tried to use the terrain to my advantage and ran the second kilometre in 4:24. Somewhere in there, I passed the 1-mile marker at just 7:00. Keep this up if you can, I thought to myself, you could be on track to run under 36′.

Then came the first time up the notorious parkrun hill. I’ve learned that I do better when I take it slow and steady up the hill, then come off it fast onto the flatter ground. This means I usually get passed up the hill but I try not to let it bother me.

A slower third kilometre, as expected: 4:51. I tried to use the downhill again on the second lap, but the headwind didn’t make it easy. Jessica and I were trading off leading each other at this point, and I made it my mission not to let her get too far ahead of me. My splits were slowing but I was still on pace to run under 37′.

Up the steep hill a second time, and my legs were starting to feel it. I didn’t have much fuel in the tank, either, but Jessica’s presence helped keep me going through the last lap. My 6th kilometre was the slowest of the race, but on the other side of it I gritted my teeth and calculated that I could run just over 36′ if I kept it up. J and I kept pace up the long back straight. My hamstrings and ankles were feeling it at this point. Come on, you’re almost there. Tackling the hill for the last time, I surged onto the track for the last 200m and tried to muster some sort of kick down to the finish line.

This was a hard race, but as Eilidh pointed out, it was a nice way to mix things up: 5 miles instead of the 5k of a parkrun, and doing a hard effort instead of a long slow run on a Sunday (although a bunch of Heathsiders that are marathon training added many miles onto this club race).

Post-race: An easy jog down Parkland Walk with Eilidh, catching up on the latest and shaking out our legs a bit. By the time I got home, I had clocked up almost 8 miles, so could count it as a race and a longish run.

Next up: I’m entered for the Victoria Park Open 5 Mile race next month. Today’s race helped me see where I am in terms of 5-mile fitness, so I know what I should work on before VP5 (more speed & tempo!).

It has taken me almost 5 years, but I’ve finally done it: I’ve run 50 parkruns! Remember when I ran my first parkrun in April 2013? That run is still one of my fastest parkrun times (ignorance is bliss when you don’t know about the hills on the course). I ran parkrun occasionally but not consistently for the first 4 years, but when I started getting into the 30s last summer/autumn, I resolved to make it to 50 parkruns by early 2018.

I would’ve hit 50 before this weekend if I hadn’t gotten a bad cold over Christmas – I had plans to run 2-3 parkruns over the holidays! – but here we are on 17th March 2018 and my goal has been achieved.

When you look at how many people have run upwards of 100 and even 250 parkruns, 50 doesn’t seem like much, but it still takes commitment to get up for a 9am run on a Saturday. For me, it helps that F gets up over two hours earlier (!) than me on Saturdays to cycle in Regent’s Park, so my 7:50am alarm doesn’t seem too bad compared to his wake-up time.

In celebration of my impending 50th parkrun, I baked these oatmeal raisin cookies to share around afterwards. Fellow Heathsider Shaan was running his 25th and Hannah was running her 30th parkrun, so they provided some millionaire’s shortbread (yum). Gabi mustered a few other Heathsiders to join us at Finsbury Park, and it was fun to be cheered on my milestone before the start.

Did I mention it was snowing and blowing this morning? You can see bits of snow on the grass in the photo above. After a balmy week of 10+C temperatures, the mercury dropped on Friday night and Saturday morning was a brisk 2C with some gently falling snow that the wind subsequently whipped around up the backside of the Finsbury parkrun course. But we braved the elements and felt extra virtuous for it. I had a busy week and felt tired so decided to run a steady Z3/4 parkrun and came in at 24:02. Not so speedy, but a solid time and a good up-tempo run for me.

Now that I have reached my 50 parkruns milestone, let’s take a moment to look at my parkrun history. While a lot of people try to run as many different parkruns as possible – dubbed ‘parkrun tourism’ – I’m a creature of habit and usually run at Finsbury Park or Ally Pally due to their proximity to my flat. I have run Hampstead Heath parkrun once and F and I even ran a parkrun in Liverpool when we were up visiting friends a few weeks ago.

I love parkrun because you can run it however you want. When I feel like testing my fitness, I’ll go to Finsbury park and hammer it (did that last weekend, hence this week’s steadier run). If I’m up for a scenic run on mainly trails, I’ll go to Ally Pally and sometimes push it but sometimes run at social pace with Gabi or Jo. I’ve volunteered twice and need to do more of that to give back to such an amazing community.

Now that I’ve reached 50 parkruns, what’s next? In general running goals, I have a number of 10k races coming up over the spring and summer so I am working on building my endurance and long run distance. Maybe I’ll try to do Hampstead Heath parkrun more often and build that into my weekly long run. We shall see. For now, I’ll rest on my small laurels and enjoy the weekend!

I ran a mile this week. So what? you say. A mile is no big deal.

What I mean to say is I raced a mile this week — on the track. Now that’s serious stuff!

The stars aligned this month as Strava (the social network for athletes) put on a 1 mile initiative, encouraging people to run a mile hard, record it, then tag it and share it with a #MyMile hashtag. Coincidentally, a north London running club was putting on the Golden Stag Mile event at Finsbury Park track, which is home base for my club‘s training sessions. A short jog from home and only £4 to enter and test my fitness with a mile on the track? Yes, please!

I have started getting back to speedwork in the past couple of months but have only managed to get to the track about once every two weeks. Not being in top speed form, I put my estimated finish time down as 6:30 and hoped to finish under that. 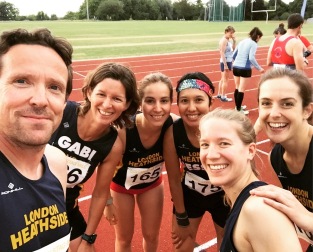 Pre-race selfie with the other Heathsiders in my heat

Luckily, I was put in a race with a few other Heathsiders whose speeds I’m somewhat familiar with. I knew if I could keep Esti and Hannah in my sights, I could run a good time. I talked strategy with a few other Heathsiders while warming up — turns out, there are conflicting views on how to pace a 1-mile race. Do you go all out and just try to finish? Do you save some for a final kick? Pace it like a 400m or 800m race (go out hard, steady, push, finish)? One guy said he breaks the mile up into 1000m, 400m, and 200m and recommended trying to stay with anyone near me, letting other runners pull me along. I liked that suggestion and decided to try and stay with people as long as I could.

Photo credit: not sure!

Well, that worked for the first two laps of my race. I got out fast and Esti soon pulled up alongside me. We stayed more or less together for the first lap and were in a nice pack with Hannah and a couple others. They pulled away and I set my sights on staying near the man in the yellow shirt; I passed him towards the end of the second lap.

That’s when things got tough: I was in no-man’s-land with no one near me for the last 800m of the race. Not ideal. There was a guy 5 seconds ahead of me and someone 5 seconds behind me. There was no time to look at my watch — I just had to run by feel and try to keep going. My mouth was dry and my legs were tired, but I pushed as much as I could, had a little bit left to kick, and finished in an official time of 6:20.1 — an automatic PR/PB, since I’d never raced a mile before, and under my goal time! It was very hard but I felt accomplished afterwards. Heathside had a great showing and the event was really well-organized by Barnet and District AC. Looking forward to next year!