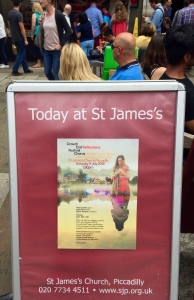 And just like that, another year singing with the Crouch End Festival Chorus has gone by. We wrapped up the regular concert season this weekend with a varied a cappella programme in St. James’s Church, Piccadilly. St. James’s Church was a new venue for us and, though it doesn’t look like much from the outside (despite being designed by Sir Christopher Wren, best known for St. Paul’s Cathedral), it offers a lovely open space inside with a great acoustic. The theme for this summer’s concert was “reflections”: each piece we sang had some sort of reflective element (water, mirrors, a double choir, or simply a sense of internal reflection).

We started off the evening with Eric Whitacre’s Water Night. I’ve been a Whitacre fan for a while, but this was the first time I’ve had the pleasure of singing one of his pieces. It is magical, the way the dense chord clusters and harmonies melt together and shimmer. After a brief piano interlude (see below), we sang Mirror Suite, a contemporary piece written by composer Alan Charlton and set to poems by Spanish poet Federico García Lorca. This was a quirky, four-movement piece with various elements of reflection embedded within it: double (and triple) choirs, canons, inverted figures, birdsong, and fugues. I didn’t fall in love with the piece, but I did enjoy singing in Spanish and experiencing the different effects of the reflective elements. F liked the imitation of birdsong (a small group of soloists) in the second movement, Réplica. 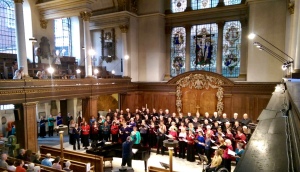 The longest piece in the concert was Josef Rheinberger’s Mass in Eb Major. Have you ever heard of Rheinberger? Neither had I, until we started rehearsing his mass. Rheinberger lived right through the middle and end of the 19th century, and elements of his mass conjure composers as diverse as Mozart, Bruckner, Mendelssohn and Bach. It was an enjoyable mass to sing, and I think we gave it a good performance. My friend A, who attended the concert, said the church’s acoustics worked especially well for the piece’s double choir and rich harmonics.

We ended the concert with two short pieces: Stanford’s pure and beautiful The Blue Bird and a fun arrangement of Michael Jackson’s Man in the Mirror. Here is the Stellenbosch University Choir singing it:

A unique part of this summer’s concert was that we were treated to instrumental interludes for piano and cello. Our very own accompanist, Peter Jaekel, played some lovely solo Debussy, and he was joined by cellist Joely Koos for Arvo Pärt’s Spiegel im Spiegel and Saint-Saëns’ The Swan. The Pärt performance was a highlight for me and other audience members, being at once contemplative, reflective, and sorrowful yet healing and uplifting.

I always enjoy our summer programs, as we get to sing a variety of shorter, unaccompanied pieces in beautiful churches and chapels: Southwark Cathedral; St. John’s College Chapel, Cambridge; Waltham Abbey. Rather than having our usual summer break now, the choir is singing in a BBC Prom at the end of July and recording Bach’s St. John Passion in September. I’m not doing all of it but am looking forward to Brahms’s Ein deutsches Requiem in October. We hope you’ll join us in the audience.