Life has certainly changed a bit since my last “What’s Been Cooking?” update. Social distancing is the new norm, so the three of us have been holed up at home (when we’re not out for our daily walk(s)) doing lots of cooking. This won’t be an exhaustive list of everything we’ve cooked since the stay-at-home recommendations started a month ago in Germany; rather, I’ll try to highlight some of our shopping strategies and follow that with cooking/baking highlights and projects. So without further ado…

F had good foresight regarding the quick global spread of the Coronavirus, so we started stocking up our pantry early with rice, lentils, dried beans, and canned goods. The only thing we forgot was flour, which sold out of the shops and supermarkets really quickly! Apparently when the going gets tough, the Germans get baking… We finally found some Type 1050 (high gluten) flour, which worked great for pizza dough but probably isn’t great for sweet baking; I finally caved and bought 2.5kg of Type 550 (all-purpose) flour online. It was not cheap but I’m glad to have it now.

We have been planning our meals weekly and doing a big shop once a week for a few years. It was simpler to shop less in London because our commutes were so long, and here in Münster we find it easier to save money when we’re not popping out to the shops every other day and inevitably impulse-buying things we don’t really need. So COVID-19 hasn’t really changed our shopping habits, except for trying to go when it’s least busy: for supermarkets, that has been around 8:30am on a weekday, and before 8am on Wednesdays for our weekly outdoor market. 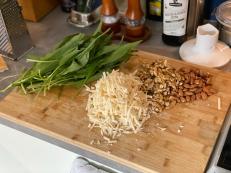 Crispy pan pizza, the small one 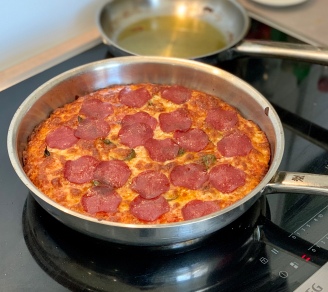 What have you been cooking while sheltering at home?

In Germany, expecting and new mothers have the advantage of a legally protected, essentially “no work allowed” time for 6 weeks before and 8 weeks after their due dates. If I were fully employed I would not legally have been allowed to keep working. As a freelancer, I think I could have continued working into the 6 weeks pre-due date, but I decided not to because by 33-34 weeks it was already tiring to cycle back and forth for my teaching commitments.

So yes – now I am on Mutterschutz (maternity leave) and working my way through some cooking and baking projects to keep me from getting too stir-crazy at home and to try and stock the freezer a bit for easy winter meals once our tiny human arrives. Here’s what I’ve gotten up to in my first two weeks off:

On Monday, we ate leftover meatloaf and mashed potatoes for lunch, then I froze the rest of the meatloaf and decided to use the mash for a project that had been on my list for a while: potato varenyky using this smitten kitchen recipe. I have fond memories of eating varenyky in Ukraine, usually with sautéed onions, butter, and sour cream. A great cheap, cold-weather, stick-to-your-ribs, carbs-on-carbs kind of meal!

The varenyky dough was simple to make and had a nice stretch to it, which made it easier to envelope the mashed potatoes and seal the dumplings. We sampled some for dinner – tasty, although the dough was maybe a tad thick – and I froze the rest of them.

On Friday, I wanted to bake something sweet for the weekend, so went for Melissa Clark’s tiny, salty, chocolaty cookies from NYT Cooking. My goodness were they good! Chewy and with crispy edges, gluten free (in case you care! I don’t), and very rich (thanks to cocoa powder and dark chocolate). G came over for boardgames on Saturday and devoured quite a few of them, and other friends also professed their enjoyment. Will make again!

It wasn’t specifically on my cooking project list, but we had leftover vegetables on Tuesday so I threw them into these Korean scallion pancakes from NYT Cooking. It was a great use of the veg and made for a nice, lightish dinner, although I wish the pancakes had turned out a bit crispier. 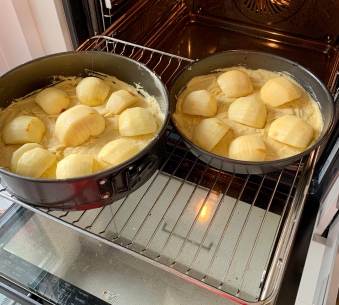 On Wednesday we were hosting friends for the group’s weekly vegetarian dinner. F made spinach lasagne and I contributed dessert in the form of smitten kitchen’s Versunkener Apfelkuchen (sunken apple (& honey) cake), which was based on a German recipe. Delicious! The honey flavor came through really nicely and the apples were cooked but not mushy. I didn’t include the salted honey glaze because we thought the cake was sweet enough without it. Friends enjoyed it and, when I asked how traditional the recipe was, a couple people said their mothers/grandmothers had made similar cakes. Score for cultural integration through Kuchen! 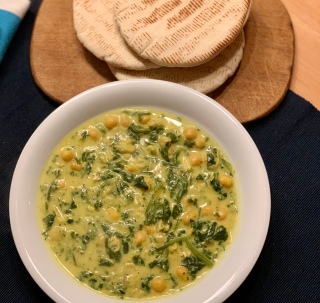 On Friday (a public holiday in Germany – thanks, Catholics!) we had friends over for brunch: pancakes, of course. Later, I made a big pot of these chickpeas from Bon Appétit. For dinner, I turned some into a spiced chickpea stew with coconut and turmeric, NYT Cooking’s Alison Roman creation that became its own hashtag on social media. I’ve made #thestew three times now and it is so warming and delicious. It’s also quick and easy to throw together, quite forgiving, and flexible: add any greens that you happen to have; enjoy with pita, rice, or sweet potato; add yogurt and garnish, or not.

With the rest of the chickpeas I’ll make some hummus and this creamy chickpea pasta. That should get us through the start of next week!

F was away for work this week and I don’t usually feel like cooking when he’s not around, tending to gravitate towards salads, grains, and other quick-prep dishes. Melissa Clark’s recipe for couscous salad with dried apricots and preserved lemon had caught my eye recently and sounded like the perfect thing for a healthy weeknight dinner. I read the recipe to get a general idea of flavors and then improvised from there, using lemon juice rather than white wine vinegar, parsley instead of dill, and adding almonds for protein and crunch.

Health in a bowl

The salad turned out really well: I’ve fallen in love with the combination of sour-salty preserved lemon and sweet, chewy dried apricots. Finely chopped herbs make a great green base for salads and a nice alternative to lettuce.

This dish is light, fresh, and healthy. I enjoyed it so much that I made it again when F got home, adding some grated carrot and diced cucumber for extra veggie points. Feel free to add or subtract ingredients as you’d like — it would work equally well with small couscous or a grain like barley, buckwheat, bulgur, or quinoa. 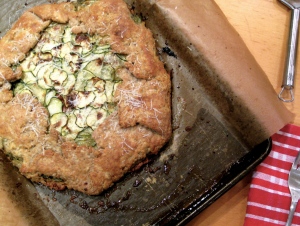 Galettes have been on my mind for a while — they keep popping up on the cooking blogs I read, filled at this time of year with stone fruit or late summer vegetables. I finally decided to try my hand at one when in the same week Melissa Clark posted a couple galette recipes with a great-looking rye-flecked crust, and The Kitchn came out with a summer vegetable galette. Both recipes looked great, so I adapted my crust from Clark, and my filling was inspired by The Kitchn. 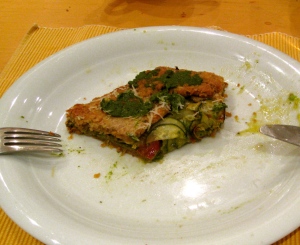 A galette comes together easily, in large part because you don’t have to shape the dough into a pie dish or anything — you can just go free-form and pile on your fillings of choice. F and I had made some pesto that we’d frozen, so I thawed it and spread it liberally over the crust; it worked as a lovely base for the tomatoes and zucchini. And this crust is very nice. Despite the excess oil/butter that appeared on the baking sheet at the end, the bottom of the crust didn’t get soggy and had a lovely bit of flaky crunch. I highly recommend this summery galette and am looking forward to trying my hand at a sweet version!

Pesto & Zucchini Galette (dough adapted from Melissa Clark at NYT Cooking; recipe inspired by The Kitchn; makes 2-4 servings, depending on how hungry you are!)

You know those recipes you see and immediately go, “I have to make this”? This, from Melissa Clark over at NYT Cooking, was one of them. I don’t know exactly what got me so excited, but who doesn’t love cheesy-doughy goodness? A free long weekend coming up meant I had time to make the dough on Saturday morning, let it rise, and prepare the flatbreads for dinner. Great cycling fuel, too, as F anticipated a long ride — and I a slightly shorter one — for Sunday morning.

I was unsure how to do the folding and re-rolling (probably should’ve watched Melissa Clark’s video first — oops), so my flatbreads ended up very doughy on one side and very cheesy on the other. That also could’ve come from using cubed rather than grated mozzarella. That said, I didn’t care because the dough is delicious. Dollop on some extra basil oil, sprinkle it with some salt, and you’ll be good to go. Feel free to stuff the flatbreads with whatever you want — I’d like to try olives next time — or don’t stuff them at all and just enjoy them with that delicious basil oil. The dough would also be amazing as pizza dough — after all, these are basically calzones.