Greetings! This is the fourth and final post in my mini “USA Trip 2018” series, documenting the two-week vacation (holiday, in UK-speak) that F and I took this August. After a weekend in NYC, a few days in San Francisco, and time exploring the Point Reyes National Seashore, we journeyed to the foothills of the Sierras then into the Sacramento Valley for the remainder of our trip. Read on to see what we got up to. (NB: none of this is sponsored – all of the following are my personal opinions and I write for fun!)

Out of the fog and into the heat: that sums up the drive from Point Reyes across the Sacramento Valley and into the Sierra foothills. Not complete without a stop at California institution In-N-Out Burger, of course!

Upon arrival in Nevada City, we strolled through the cute, hippie, old west town center before splashing in the Outside Inn pool and relaxing in the heat with the New York Times. We had a delicious dinner at the New Moon Cafe (recommended by J&E) then called it an early night.

I knew nothing about Nevada City before this trip. Why did we choose it? Well, we had originally considered Lake Tahoe but then realized it would be jammed with tourists and vacationers in August. As an alternative, a number of friends had recommended a stop in Nevada City, one of the first Gold Rush towns in the Sierra foothills. 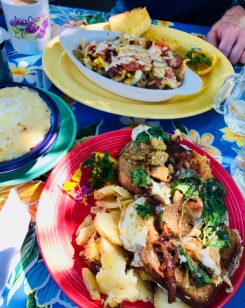 Monday was a kind of rest day for us. We slept in then had a delicious brunch at Ike’s Quarter Cafe (thanks for the recommendation, Liv!) and lounged around in the 90F+ heat. Later, we roused ourselves enough to drive to Edward’s Crossing and take a dip in the Yuba River (another spot-on recommendation from Liv). The sun was hot, the water was cool, all was well. And luckily we didn’t come across any rattlesnakes. Smoothies and wraps from Fudenjüce (good tip from B) rounded off the day. 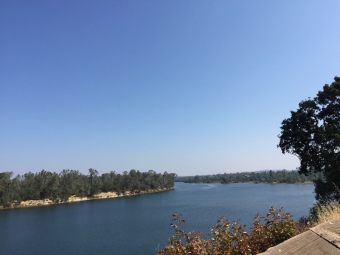 We spent a leisurely morning writing postcards, then made our way out of the foothills and into the Sacramento Valley. First stop: Folsom, home of the eponymous Folsom Prison made famous by a Johnny Cash song, but also home to family friends (and avid athletes) J&E, who generously hosted us for two nights. After we arrived and admired their fleet of bikes and rowing shells, E took F and me on an easy 8-mile cycle on the paved “Johnny Cash Trail” to stretch our legs before dinner. It was also a test-ride on their “guest fleet” bikes for the next day’s adventure…

…a 30-mile cycle from Folsom to Old Sacramento, almost all on paved paths along the American River and including a mini pace line to help the miles pass. It was fantastic to ride so far and not encounter any cars. We enjoyed lunch on the classic Delta King riverboat and then strolled through Old Sac before taking the light rail back to Folsom.

E took F out for a final cycle – faster this time, since I wasn’t there to hold them back – while I went for a run. We all met at Karen’s Bakery for a post-workout coffee. It was a nice end our stay with J&E – they treated us well and E was an excellent cycle tour guide! In the early afternoon we drove to my grandmother’s house in Roseville, where we caught up on the family news, showed off our holiday photos, and met Uncle K for dinner.

F and I got up early with Grandma; she did her regular 2-mile walk and we went for a short run. After breakfast, we drove back to San Francisco, returned the rental car, and flew back to London and reality. We had an amazing trip. I enjoyed introducing F to the west coast while revisiting some of my favorite places and sharing many new experiences with him. We’ll be back, California!