Last week as part of the Crouch End Festival Chorus (CEFC), I had the privilege of singing in the world premiere of an ambitious and challenging new jazz work by composer Roland Perrin at London’s Southbank Centre. The piece, titled Lansky, the Mob’s Money Man, is billed as a “choral jazz drama” and depicts the life of Meyer Lansky, a Jew whose family emigrated to New York in the first decade of the 20th century to escape pogroms in their native eastern Europe. Lansky ended up rising high in the Jewish mafia’s ranks to become known as the “Mob’s Accountant.”

Perrin’s jazz drama tells Lansky’s story, from his life as a boy in a village to his arrival on New York’s Lower East Side to his travels in Cuba and his retirement in Florida. The chorus plays different roles throughout the 19-scene piece, while soloist Rachel Sutton sings as a number of the women in Lansky’s life and narrator Allan Corduner punctuates the music with brief accounts of Lansky’s doings (all in a great 1950s New York / film noir accent). The fantastic Blue Planet Orchestra, Perrin’s own jazz band in which he plays piano and accordion, helps hold it all together.

Let me tell you: this piece was hard. Perhaps one of the hardest things I’ve sung, in large part because I’d never really sung jazz. It took me at least a month of rehearsals to realize that the seemingly random notes we had to learn actually did fit together with the accompaniment and other voice parts into a comprehensive whole. Once I figured this out, Lansky turned out to be a lot of fun to sing.

I loved all the different styles that Perrin incorporated into his piece: ragtime, swing, blues, Klezmer (that was the most fun to sing), Afro-Cuban, crazy-sounding free jazz-like stuff — you name it and it was probably in there.

The performance itself went well, and I felt the most relaxed that I ever have in a chorus concert. Many audience members gave rave reviews, and luckily no one seemed to notice those few missteps in scenes 15 and 16… I really hope that Lansky gets performed again and perhaps even recorded one day — it is certainly a testament to Perrin’s versatility and it tells a fascinating story in a vibrant way. 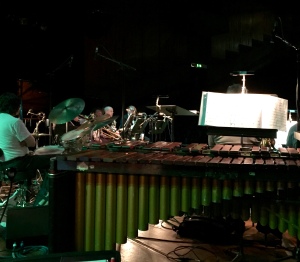 My view from the first row of the soprano section

Click here to see more photos from the concert, and watch the trailer below to get a sense of what the piece is like:

Up next for CEFC? Rachmaninov’s Vespers (glorious!) at Southwark Cathedral and St. John’s College Chapel, Cambridge in July.